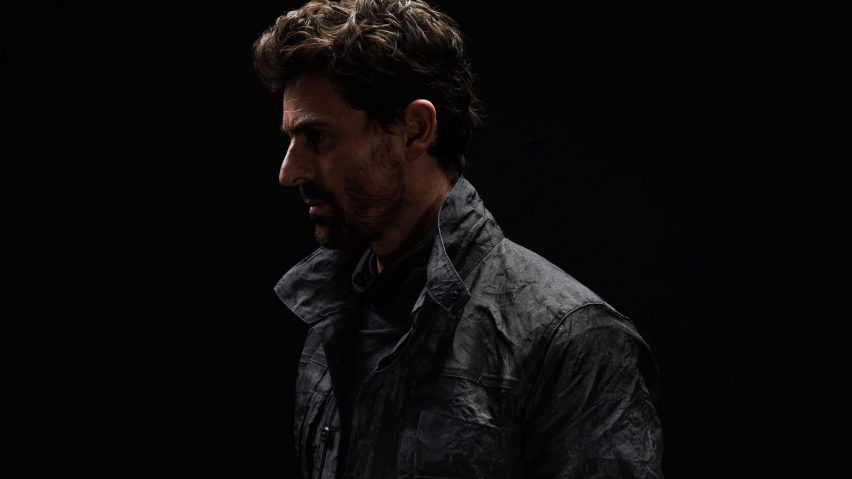 Experimental clothing brand Vollebak has created a near-indestructible jacket from Dyneema – a fibre that is 15 times stronger than steel.

Named the Indestructible Jacket, the innovative clothing from the London brand is designed as an extremely rugged outdoor coat that is almost impossible to rip.

Every fibre in the jacket is made from Dyneema – a plastic called an ultra-high-molecular-weight polyethylene, which is known as the strongest fibre ever made.

“In our testing we exposed the jacket to the shearing, tearing, and blunt-force traumas that you’ll get in the real world from rocks, ice, trees, and falls,” Steve Tidball, co-founder of Vollebak told Dezeen.

“Dyneema is so strong it’s almost impossible to rip,” he said. “Our knife slash test shows what damage the sharpest rocks would be likely to inflict. We also simulated a 30 mile per hour fall and drag on concrete and it was fine. Blunt-force trauma will have almost no impact on it other than marking it,” he continued.

“But it won’t survive bullets or the inside of a volcano. We designed it for adventure not for war zones, or flamethrowers.”

Vollebak see the jacket as a logical evolution of the utility jacket, with denim jackets and leather bomber jackets being the Indestructible Jacket’s ancestors.

“The denim jacket was born in 1880, and quickly became the default uniform for cowboys, miners and labourers,” explained Tidball. 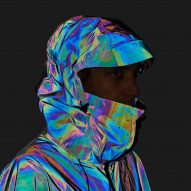 “It was followed about 40 years later by the leather bomber jacket built for fighter pilots in open cockpits at 25,000 feet – so rugged, lightweight utility jackets have been used to protect people carrying out the toughest jobs in the toughest places for well over 100 years,” he continued.

“So we thought that 140 after it was born, it was probably time to rebuild the utility jacket from the ground up with the strongest material on Earth.”

The jacket gets its toughness from Dyneema, which is usually used to construct bullet-resistant vests as it can be 15 times stronger than steel – on a wright for weight basis.

“It’s the material that makes it so tough,” explained Tidball. “To understand just how tough Dyneema is, you have to look at how it’s being deployed in the world today – it’s used to make bullet-resistant vests, armour and helmets.”

“It’s used in panels on tanks to protect against stronger ballistic threats like anti-tank projectiles,” he continued. “And you’ll find it in bulletproof cockpit doors in most commercial planes in the US. Unlike other high-strength materials it’s so light it floats on water, and it’s resistant to the long-term effects of moisture, UV light and chemicals.”

To complement the tough material, Vollebak has detailed the Indestructible Jacket with hardy buttons made from the “world’s toughest nut”.

“Even the buttons are extremely strong,” explain Tidball. “Ours are carved from corozo nut, which is the world’s toughest nut, and they’re anchored on military tape. This method allows the jacket to flex and withstand tearing forces, as each button is free to slide up and down its section of military tape.”

Described by the brand as The Indiana Jones of utility jackets, the coat has a reinforced double collar that can be worn in four different configurations.

Although Dyneema is extremely resistant, due to its cost and complex fabrication process Vollebak does not anticipate the material becoming widespread for clothing.

“Well it’s extremely expensive, it takes far longer than standard fabrics to produce as it’s made to order, and it’s difficult to work with,” said Tidball. “And these are three things I suspect almost no other brands are looking for, but we’re happy to take on.”

However the brand does believe that it has potential to be used in composite with other materials.

“It’s hard to say what other brands are going to do. If the cost and complexity both remain high, then I think you’re unlikely to see more of it in the way we’ve used it, which is a jacket built from 100 per cent Dyneema,” he continued.

“But I think you could start to see it used much more widely as a composite – so it becomes an ingredient added to other materials to make them exceptionally strong, just like carbon fibre is in other industries today.”

Indestructible Jacket is the latest piece of experimental items from Vollebak, which Steve Tidball established in 2015 with his twin brother Nick. Others include the first jacket made of graphene, a T-shirt made entirely from wood pulp and algae and a jacket that reflects light from two billion glass spheres.

15 Inspirational quotes to start your day off feeling motivated and positive. Inspiring words can help our mindset tremendously and are such a great tool to combat anxiety and fear. I hope these positive quotes uplift your spirits and help you begin your day feeling good.