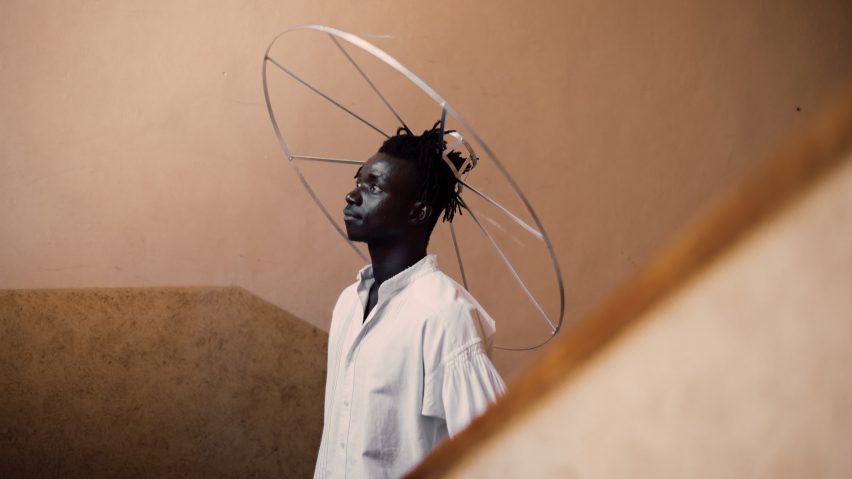 Toppino, who is an Italian costume designer and milliner, created two hats comprised of large, bent aluminium structures. One is covered with stretched fabric, while the other is kept bare.

The hats aim to make people reflect on the role of functionality in fashion during the current coronavirus pandemic, specifically how clothing and accessories can play an important role in social distancing.

“Protection is one of the principal functions of dress,” said Toppino. “We usually ignore that because we rather prefer to think about style and glamour.”

“But as we are living in a strange time where social distancing has become a buzzword, the question arises: how can dress help protect us?

The Structure hats take cues from the oversized, broad-rimmed hats that were fashionable during the 18th century, as well as the steel-cage crinolines used underneath skirts that were popular in the Victorian era.

Rather than ordinary hats, Toppino considers her designs to be large, structural accessories that can help the wearer to keep other people at an arm’s length.

With a wide brim of around 45 centimetres, the hat works to create what the designer calls a “protective orbit” around the head.

“If we look through history, fashion enabled social distancing through the ages,” said Toppino, adding that maintaining social distance between genders, classes and races was a key element of social etiquette. 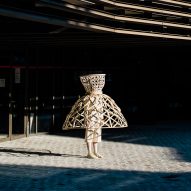 Crinolines, for example, were used to maintain distance between people in crowded public spaces, the designer explained, used to keep unwanted suitors away.

After crinolines, women continued to use fashion as protection against unwanted attention, said Toppino, in the form of items such as hat pins and oversized hats.

Toppino designed two Structure hats, one intended for men and one for women. The women’s hat features a curved, symmetrical structure made from bent aluminium that has been covered with pink silk, and finished with a layer of see-through powernet fabric.

The men’s hat, on the other hand, features the same voluminous structure but with a rougher surface finishing and no added fabric, leaving the aluminium bare.

The hats are a continuation of Toppino’s thesis project that she completed while studying costume design at the London College of Fashion, which saw her use the same see-through, structural design to create a performance piece in the form of a wearable oversized head.

Research and design platform Livable also created a wearable frame that resembles 19th-century crinolines. Its rattan design is worn over the head and body to encourage people to keep their distance during the Covid-19 pandemic.

Called Well-Distance-Being, the hourglass-shaped design consists of two cages that rest on the user’s shoulders – one section facing upside-down to shield the neck and head and another facing downwards to cover the body.