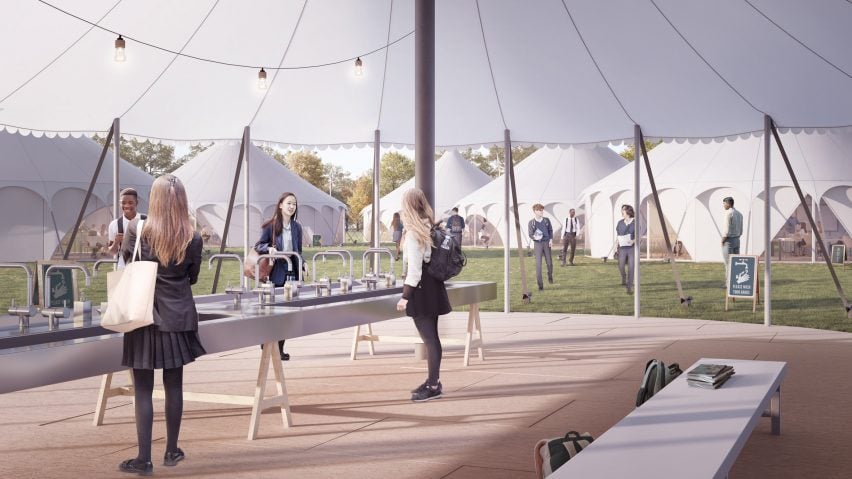 This week on Dezeen, architects and designers envisioned socially distanced offices, schools and planes, while a gridded social-distancing system was installed in an Italian piazza.

London architecture studio Curl la Tourelle Head designed a concept for pop-up classrooms in tents that would allow pupils to remain two meters apart, while Weston Williamson + Partners outlined its plans for an office with transparent screens around desks, hands-free doors and a barista.

To allow social distancing to be achieved on planes aviation consultancy Factorydesign proposed the Isolation screen divider, which would be placed in the middle seat of a row of three.

In Italy, Caret Studio installed a gridded system across a piazza the town of Vicchio near Florence to clearly inform people of the social-distancing advice circulated by the Tuscan authorities.

For children that are still in lockdown, Dezeen rounded up a series of architecture, design and engineering activities for children.

“A very talented student of mine had the exact same idea about a decade ago, even some of the letters are exactly the same,” he said.

“As I am sure you had no way of seeing her class work, this is just another case of great minds thinking alike. Sometimes we all fish in the same river close to each other.⁠”

In other design news, Karim Rashid was named the winner of the 2020 American Prize for Design, which is regarded as “the highest and most prestigious design award in the United States”.

“Design is my lifelong hobby,” Rashid said. “Design is something that can be so emotional, so experiential, so romantic, so poetic, and so human and yet constantly moves us forward.”

In China, the government sought to curtail copycat architecture and supertall skyscrapers by issuing a decree to improve architectural standards.

The policy released by the Ministry of Housing and Urban-Rural Development stated that “building plagiarism, imitation, and copycat behaviour are strictly prohibited,” while “new buildings over 500 metres are not allowed to be built.”

Shipping containers continued to be in the news, with the modular steel boxes being used to build houses in the United States and Germany.

In Austin, Texas, Mark Odom paid homage to the 1950s by designing a house with a mid-century modern aesthetic, which was photographed with a vintage car parked outside.

Dezeen rounded up eight other houses that were designed to show off their owners’ cars.

Other projects that have been popular with Dezeen readers this week include the ME Dubai hotel at the Opus by Zaha Hadid Architects, an off-grid cabin in New York clad with infested wood, and a light-filled house in San Francisco designed by Malcolm Davis Architecture.

This week on Dezeen is our regular roundup of the week’s top news stories. Subscribe to our newsletters to be sure you don’t miss anything.