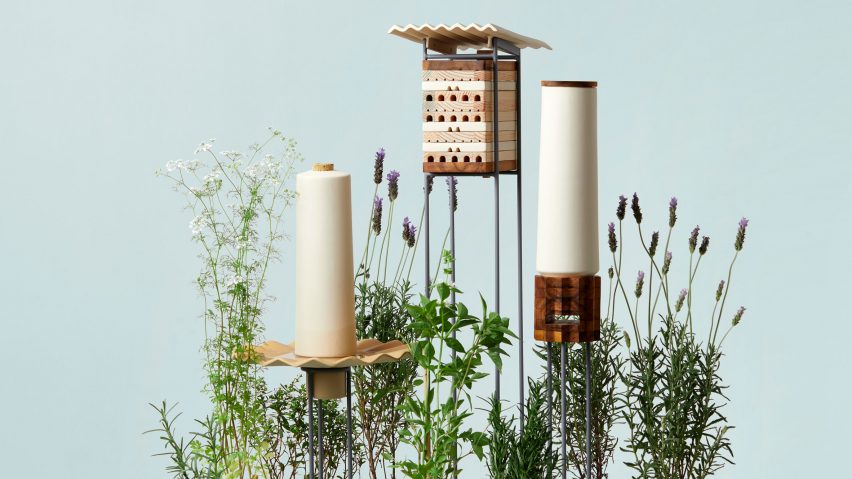 As cities grow and bee populations continue to dwindle, designers are increasingly looking for ways to bring nature to urban areas. In celebration of World Bee Day, we’ve rounded up seven urban shelters for the vital insects.

In the age of the anthropocene, the importance of bees – and other pollinators such as butterflies and moths – has become more apparent than ever, with more than 75 per cent of the world’s food crops and 35 per cent of global agricultural land depending on animal pollination.

However, bee species are under threat, with current extinction rates being 100 to 1,000 times higher than normal due to human impacts, according to the United Nations (UN).

To raise awareness of the importance of bees and other pollinators, and to encourage people to take action in protecting them, the UN designated 20 May as World Bee Day.

To mark this, we’ve selected seven designs that aim to make bees feel more at home in urban areas, from bulbous clay chairs punctured with holes to clean-cut, minimalistic structures made from wood:

Mexico-based studio MaliArts aimed to generate a closer bond between human-centric cities and nature with its Refugio project, which comprises of three structures built for solitary bees.

Each design serves a different purpose: to give shelter, to provide food or to offer water. The wood and ceramic shelters are designed in such a way as to attract the endangered insects, based on nesting sites found both in nature and on farms.

Find out more about Refugio ›

These bee homes developed by IKEA-led research lab Space10 can be designed for free by anyone with a computer and internet access, in a bid to encourage people to preserve the solitary species.

Users can create their own rooftop habitat using the provided specifications before downloading the files and sending them to their local CNC machine-owner to be built.

Find out more about Bee Home ›

Please Stand By by Marlène Huissoud

Bulbous white chairs punctuated with holes act as “hotels” for city-dwelling pollinators such as solitary bees, wasps and butterflies in this project by French designer Marlène Huissoud.

Each of the sculptural objects have been made from nature-friendly materials including unfired clay, natural binders and wood, and are Huissoud’s way of giving back to nature.

Find out more about Please Stand By ›

Wildhomes for Wildlife by IKEA

Another bee-centred project by IKEA saw the Swedish furniture company work with UK artists and designers to create a collection of animal habitats using items of its repurposed furniture.

Designer Adam Nathaniel Furman transformed IKEA’s Eckbacken and Hammarp worktops into a totem pole-like tower with holes cut into it that invite bees and wasps to stop and rest.

Find out more about Wildhomes for Wildlife ›

Food for Buzz by Matilde Boelhouwer

While these aren’t shelters, Matilde Boelhouwer’s Food for Buzz designs offer a place for the “big five of pollination” – bees, bumblebees, hoverflies, butterflies and moths – to rest and recharge.

The Dutch designer created a series of artificial flowers from screen-printed polyester that serve as emergency food sources for the city-dwelling insects by turning rain into sugar water.

Find out more about Food for Buzz ›

Bettina Madita Böhm wanted to encourage more people to learn how to keep bees in urban environments with her Apiarium hive, designed for use on the roofs of city buildings.

At the base, a cylindrical chamber provides space for the bees to nest. As the hive grows and the bees start to form the honeycomb, an extra chamber with a hexagonal pattern is added to the top.

The concrete structure contains air canals to insulate it in colder seasons, and is topped with a flower pot to act as a cooling device in the summer – in addition to attracting the bees and encouraging pollination.

Find out more about Apiarium ›

Norwegian architecture studio Snøhetta aimed to encourage bees to take up residence in the city of Oslo with these Vulkan Beehives.

Covered with a pattern of distorted hexagons, the wooden structures are able to house 160,000 bees, which can enter through a small slot towards the base of each hive.

Find out more about Vulkan Beehive ›