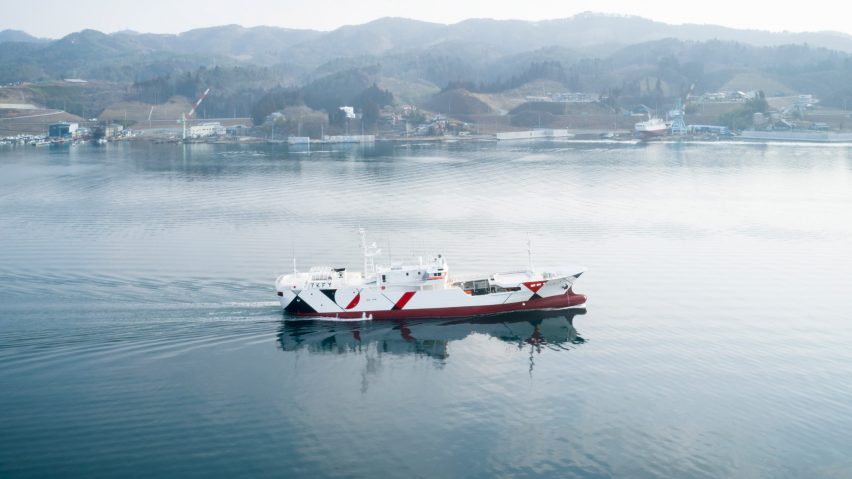 Straight lines and geometric symbols feature inside and out this longliner tuna fishing ship, which Nendo designed to relieve the mental and physical stress imposed on its crew when out at sea.

Designed for Japanese tuna fishery Usufuku Honten, based in Kesennuma City in Japan’s Tohoku region, the Shofukumaru longliner ship weighs a total of 486 tonnes and has capacity for 15 crew members.

Nendo was given a brief with three key words – straight lines, unevenness and massiveness – which it used to create exterior and interior designs that offer a “sense of security on solid ground”.

The crew spends a month at sea at a time, catching bigeye and bluefin tuna for the fishery – a job that is strenuous on their mental and physical wellbeing.

According to the company, this results in a turnover rate of more than 50 per cent among the younger members of the crew.

The fishery therefore tasked Nendo with designing an interior and exterior for the fishing vessel that would help alleviate the stress of the team, and in particular would appeal to its younger workers.

Nendo deconstructed Usufuku’s trademark, comprised of the Japanese emblems including a chigai-yama (mountains), hoshi (star) and ichi (one), and modernised them to create a simple graphic pattern made up of straight lines and circles.

This pattern was then repeated in adapted forms across both the exterior surfaces and interior elements such as the onboard flooring.

“The idea was conceived from the notion that our species, not originally accustomed to spending long periods of time at sea, might be comforted by linearity reminiscent of life ashore: the straight lines of buildings, windows, doors, and smartphone and TV screens,” Nendo explained.

Striped joints and rectilinear openings were incorporated into the interior design, softened with curved surfaces in certain locations to ensure safety.

The studio also wanted to create an “unevenness” in the boat design, to avoid creating repetitive interiors that are often seen in environments focused on functionality, such as hospitals.

According to Nendo, these homogenous designs often cause “psychological stress” for users.

Linear patterns and materials were therefore scattered at random and in moderation across the vessel, to create spaces with different characters that the crew won’t get bored with.

According to its creators, the Shofukumaru boat is the first domestic tuna fishing vessel to be equipped with a Wifi system.

Other additional features designed to recall life on land include the furniture, which sees bulky tabletops and “stump-like” stools that appear to be rooted to the floor. 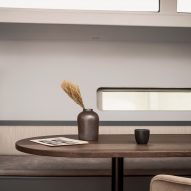 Nendo is not the only studio to foray into boat design. Danish studio Norm Architects designed homely interiors for a 20-metre-long luxury yacht named Bella.

Back in 2014 architecture firm Foster + Partners designed a 20-metre-long motor yacht with a white leather interior, while in the same year Zaha Hadid designed the Jazz superyacht for German shipbuilders Blohm+Voss.