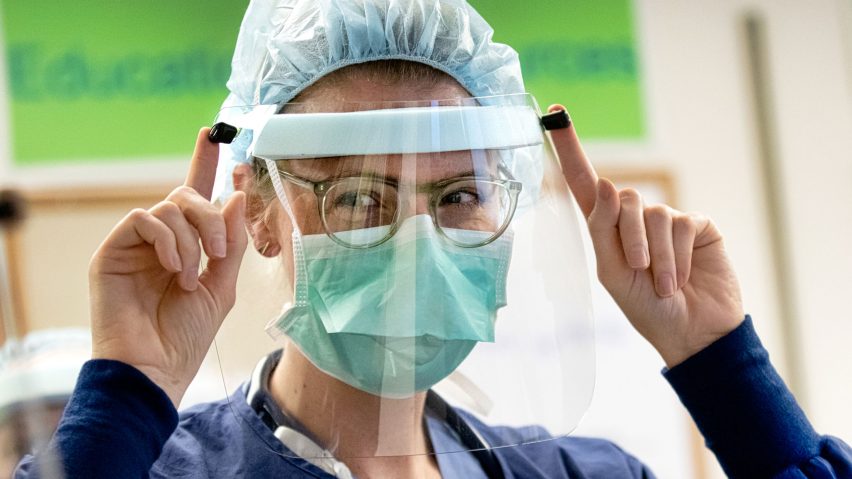 Creating personal protective equipment for frontline medical workers fighting coronavirus is just like making sportswear for an athlete, says Nike’s Michael Donaghu, who was part of the team that made face shields from the brand’s supply chain.

Donaghu, who is vice president of innovation at Nike lead a small group to create the personal protective equipment (PPE) for frontline medical workers. While different to the sports brand’s typical focus, he said there were enough similarities to make the project straightforward.

“It was a really easy switch to say these are frontline athletes who are going to need equipment, we’re going to go solve the problem for them,” Donaghu told Dezeen.

“We focused on an athlete need, we came up with a design solution.”

The main aim was to create face shields quickly, said Donaghu, so the Nike team chose to focus on using only materials already available in their supply chain.

The Nike team gathered at the company’s headquarters in Beaverton, just days after they were officially told to work from home, to swiftly develop the PPE for doctors, nurses and other frontline medical workers.

“Within a couple hours, we’d produced about 20 to 25 prototypes,” Donaghu said.

After testing the prototypes with medical staff from Oregon Health & Science University (OHSU), a public university with two hospitals in Portland that was Nike’s partner on the project, 25 designs were developed further.

The shortlist was taken to the hospital where they were tested by more frontline workers, who created a ranking order of preference.

Project focused on ease of taking PPE on and off

“Twenty-four hours into the project, we already had a really strong signal from our athlete that we could design and make a solution that they would be really happy with,” Donaghu added.

While a face shield can be a simple curved veil, Donaghu said Nike decided to focus on ways to refine the design. In particular, its iterations played with the ease of taking the face shields on and off.

“When they showed up to review the prototypes, they were very much drawn to the designs that we had designed that could be tightened and loosened really easily,” he explained.

Nike’s face shield is modelled on a design that OSHU was already using, and features a foam-like band that is repurposed collar padding and clothing cords to tighten the mask.

“Then there’s a foam piece that we borrowed from our footwear collar linings, the cushy stuff that goes around your ankle. We layered up versions of that,” Donaghu explained. 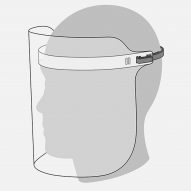 He said the medical workers found that the foam was “really fuzzy, soft, comfortable”, providing a welcome change to the traditional material.

“They thought that was phenomenal,” he added. “All the face shields they’d ever used were just raw, kind of scratchy, open-cell foam.”

One of the main challenges was to create the shield from thermoplastic polyurethane (TPU), the rubbery plastic used for the airbag in the sole of its Air shoes.

More recent iterations of the sole have been translucent, so Donaghu said they had to “use a recipe that we maybe hadn’t used in a while”. The team also used the TPU to creates lenses for a powered, air-purifying respirator (PAPR), which are used to safeguard medical workers in contaminated areas.

As reported last week, Nike has now shipped over 130,000 units of its face shields and PAPR lenses to more than 20 hospitals across Massachusetts, Missouri, Ohio, Oregon and Tennessee.

It is among a number of organisations using design skills and manufacturing capabilities to produce PPE to help hospitals and medical workers with shortages. Others include Apple, architecture firm Foster + Partners, as well as researchers at Massachusetts Institute of Technology and University of Cambridge.

Donaghu said that while they won’t produce PPE following the crisis, he hopes that some of the developments made could be helpful in the future.

“Nike’s not in the PPE business and a lot of other companies around the world who are stepping up to help are also not,” he explained.

“But maybe it will make the whole state of PPE somewhat improved because a large group of thinkers got involved to see and define what was possible.”