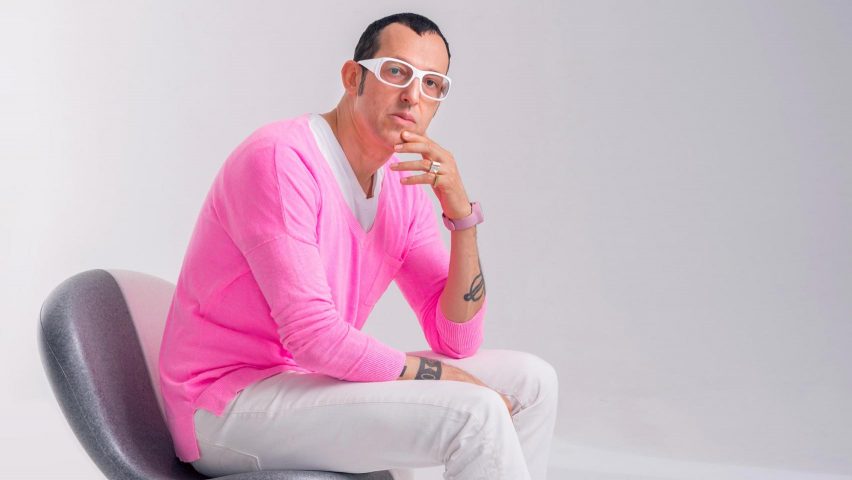 New York designer Karim Rashid has won this year’s American Prize for Design, which is regarded as “the highest and most prestigious design award in the United States”.

The New York designer was named the 2020 laureate of the accolade awarded annually by The Chicago Athenaeum: Museum of Architecture and Design and The European Centre for Architecture Art Design and Urban Studies.

Rashid, whose best-known works include the Snoop and Woopy chair and the Bobble water flask, describes himself as a “design pervert, cultural shaper, poet of plastic, digipop rockstar”.

“Design is my lifelong hobby,” Rashid said. “Design is something that can be so emotional, so experiential, so romantic, so poetic, and so human and yet constantly moves us forward.”

He intends to champions “democratic design”, a term he uses to describe making good design available for all, through projects focused on unnoticed or overlooked items.

Pans with colourful handles, a faceted glass bottle for American vodka brand Anestasia, a “deconstructed” wine bottle and a smartphone charger are among his creations.

“We must evolve, we must innovate, and we must change,” the designer added. “I want to change the physical world.”

In addition to 3,000 objects, Rashid’s portfolio also includes fashion, exhibitions, interiors and architecture projects, completing a sex shop in Munich, the University of Naples subway station and a restaurant in Dubai.

The Chicago Athenaeum’s president Christian Narkiewicz-Laine commended Rashid for his “dizzying array of projects going all over the globe”. “What stands out is that the man is driven. Scratch that. Hyper-driven,” Narkiewicz-Laine added.

“Entering the mad design world of Rashid is like being trapped inside a gigantic, rotating kaleidoscope, where the turning and twisting of bits of coloured materials between two flat plates against two plane mirrors produce an endless variety of crazed patterns and dizzying possibilities,” he said. Born in Egypt in 1960, Rashid received a Bachelor of Industrial Design from Carleton University in Ottawa, Ontario, Canada.

After graduating in 1982, he moved to Italy to study at the Rodolfo Bonetto Studio in Milan. He worked under influential designers Ettore Sottsass, Rodolfo Benetto and the late Alessandro Mendini, who he counted as a mentor.

Rashid established his New York design studio in 1992. He teamed up with architect Alex Hughes to launch an architecture and development firm called Kurv Architecture in 2017, the same year he also established a line of kitchen utensils and accessories.

Described as “the highest and most prestigious design award in the United States”, the American Prize for Design is awarded by The Chicago Athenaeum in conjunction with the Good Design Awards.

Each year, candidates are nominated by design practitioners, press, educators and its advisory board, which includes architects and designers like Adrian Smith, John Marx, James von Klemperer, Santiago Calatrava and Serqei Tchoban.